The famous Folk Musical Instrument Museum is now fully opened once again after its refurbishment and technical upgrade. The centre is now 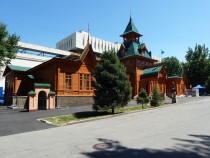 far more than a museum and has become a centre of performance and tuition to bring alive its herritage. This is not to belittle its importance as a now quite ‘high tech’ display area for its ancient instruments of the Kazakh people. I personally visited a performance on the 26th June for the first time and was totally not prepared for the world class performance that was given. A string Ensemble from the Almaty Symphony Orchestra combined with a traditional folk group to perform a range of fusion symphonic pieces as well as Mozart and Leroy Anderson’s ‘Typwriter’. My only criticism was that the bell on the ‘return’ of the Typwriter was missing, so losing a little of the humour.

The Folk Museum is not one of the world’s largest venues, but it is one of the worlds best in my opinion, and all visitors to Almaty should put this on there ‘must see list’. Bravo!

Opening Times:
Tuesday to Sunday 10am to 7pm
Monday closed