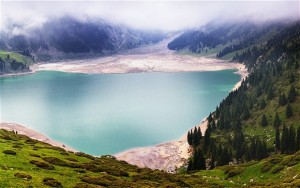 The Park was opened in 1996 and is an area located on the northern slopes of  Zailiysky Alatau (“ meaning raised mountains”).  The park occupies and area of about 200 thousand hectares stretching from Gorge Turgen in the east to the river Chemolgan in the west.

The park is almost untouched by the advances of civilisation and contains a wealth of differing habitats  from woodlands  to Alpine meadows,  glaciers and melt water lakes.  The range of trees is particularly of note.  From  apricot, kurchavka Mushketov and maple Semenov, currants Yancheuski, Caucasian carcass and, of course,  to the famous apple Sievers. The area is probably the genetic root of  all the know varieties of apple trees in the world.

From Almaty, the park is easily accessed by the route to the Big Almaty Lake and a small fee is levied for access.